We use cookies on our website. They help us get to know you a little and how you use our website. This helps us provide a more valuable and tailored experience for you and others.

You can revoke cookies at anytime at the bottom of the page.

'Sour is the new bitter'
Bitter beers are still popular. IPAs and dry hopped beers have never been so numerous in our stores. Meanwhile, interest in ‘sour beers’ has grown worldwide and Brewery Lindemans has seen demand for its lambic beers rise significantly. The expanded production capacity enables Lindemans to respond to this new trend by developing new, creative products. Always showing full respect, of course, for the traditional lambic beer.

"The Belgian Lambics have something mysterious about them," says Mikkel Borg Bjergsø, founder of Mikkeller. "The spontaneous fermentation process adds to that mystery. We have been experimenting with pretty much all beer styles, and finally we got to work with Lindemans lambic!"

SpontanBasil
The quirky result of collaboration between Lindemans and Mikkeller will be available from mid-May in a limited edition of 25,000 75 cl bottles through better beer retailers and Delhaize.

"SpontanBasil has become exactly what we had in mind at our first exploratory talks," says Geert Lindemans, General Manager of Brewery Lindemans. "It is a complex but surprisingly refreshing lambic, perfect as an aperitif or as a companion to a delicious (summer) dish."

Foodpairing
Beer and food are increasingly being linked. Restaurants understand more and more that not just wine can be a good companion for a dish.

"As a Belgian I am particularly proud of our beer culture, and that is also reflected in my extensive beer menu and experimental cuisine," says Vincent Florizoone, head chef in the Grand Cabaret restaurant in Nieuwpoort and a pioneer in cooking with beer.

"When Brewery Lindemans asked me to create some dishes that perfectly fit with their SpontanBasil, I did not hesitate for a second to get to work." 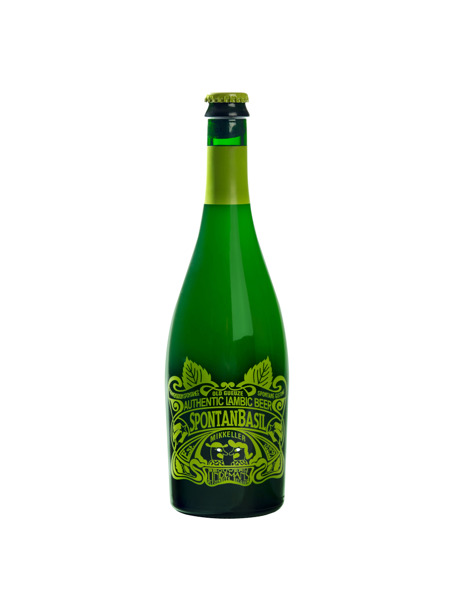 The Lindemans family brews lambic since 1822 in Vlezenbeek: a village in the heart of Pajottenland. Vlezenbeek is a small village, which has the immense advantage to benefit from an exceptional micro flora. The air there is loaded with hundreds of specific wild yeast, including the best knowns that are the "Brettanomyces Bruxellensis" and "Brettanomyces Lambicus". These unique microorganisms allow the Lindemans lambic brewery to brew a beer using a unique method: spontaneous fermentation. Lindemans family has always remained true to craft brewing processes. The 45 employees of the brewery, who are all part of the heart of the family, have helped to develop this (inter) national success.

Lindemans has become an established name in the world of international beer. The brewery is now the largest independent family lambic brewery. In 2017, Lindemans has produced over 104 000 hectolitres. 63% of production is exported to 45 countries, including the United States, France, the Netherlands, Russia, China and Japan. In recent years, foreign sales have risen sharply.